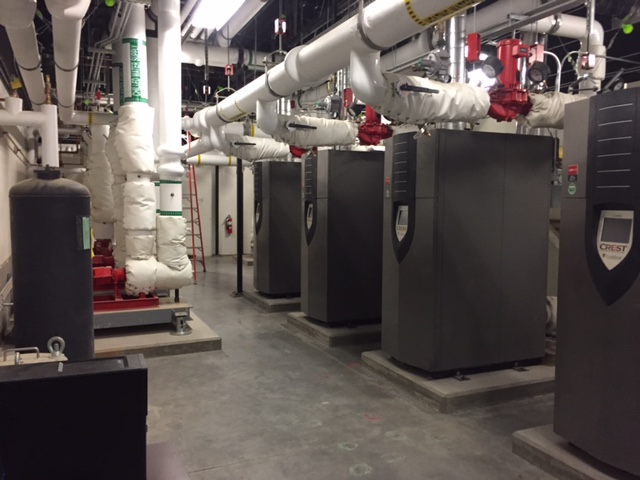 The CNGC Commercial and Industrial Conservation Incentive Program has helped Tri-Cities Airport take their building to the next level by blending efficiency, functionality, and style into their state-of the art airport.

Local trade allies worked with Mead & Hunt Architects to install systems that were energy-efficient while still aligning with their vision for the state of the art facility.  The new heating system installed utilizes four Lochinvar condensing natural gas boilers that significantly exceed the minimum efficiency required by code, increasing the efficiency of the natural gas by 12 percent. CNGC was able to offset installation costs with a $32,000 cash incentive. “Looking at the figures, the payback on these things are going to be very, very fast,” said Port of Pasco Commission President Ron Reimann.

To take the upgrades one step further, the 30-year old insulation on the existing terminal is being replaced with rigid foam insulation surpassing minimum building codes by 25 percent. Reducing outside air influences are critical for controlling temperature and humidity levels in the airport, which maximizes comfort and minimizes operating costs. An additional cash incentive of $32,080 will be provided by CNGC to the Port of Pasco when the insulation installation is completed.

Once complete, the airport will have a new concourse with more gates and flights, an expanded dining area, smoother security checkpoints, upgraded car rental area, and additional seating with views that capture the beauty and heritage of the Tri-Cities area. Plus, the Port of Pasco will have received over $70,000 in cash incentives just for upgrading to energy-efficient natural gas boilers and insulation.

This website uses cookies to improve your experience while you navigate through the website. Out of these cookies, the cookies that are categorized as necessary are stored on your browser as they are essential for the working of basic functionalities of the website. We also use third-party cookies that help us analyze and understand how you use this website. These cookies will be stored in your browser only with your consent. You also have the option to opt-out of these cookies. But opting out of some of these cookies may have an effect on your browsing experience.
Necessary Always Enabled
Necessary cookies are absolutely essential for the website to function properly. This category only includes cookies that ensures basic functionalities and security features of the website. These cookies do not store any personal information.
Non-necessary
Any cookies that may not be particularly necessary for the website to function and is used specifically to collect user personal data via analytics, ads, other embedded contents are termed as non-necessary cookies. It is mandatory to procure user consent prior to running these cookies on your website.
SAVE & ACCEPT