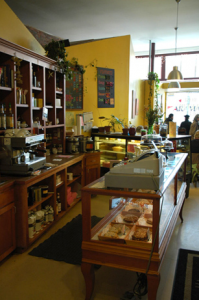 According to Johnny Lahr, owner of La Vie en Rose Bakery, their old oven was no longer making the grade. “Uneven cooking and the time it took to reach operating temperature helped in my decision to look for a new, more efficient gas oven.” The rebate offered from Cascade’s Conservation    program made the choice for an efficient model even easier. “I chose this oven for two reasons: the reliability of the model and the rebate that  was offered from Cascade,” said Lahr. The bakery is now cutting baking times in half and adding green to their bottom line with reduced energy costs.”The old oven took about 20 minutes to preheat, but the new model only takes eight minutes,” said Lahr.

Kelly’s O’Deli Catering is seeing the benefits of energy-efficiency. “We now have more equipment, yet our gas bill has not increased,” said owner Dianne Blakesley. The catering company installed two high–efficiency convection ovens and a tankless water heater. Affordable energy bills are only half the story. The catering company’s tankless water heater provides hot water on-demand—reducing energy costs by eliminating heat up times. Additionally, they are seeing faster baking times with their two convection ovens, providing a more efficient cooking process.  According to Blakesley, “I can cook larger quantities of food in a shorter amount of time. It has made a big difference.”

When it came time to purchase foodservice equipment for Bob’s Burgers and Brew’s new location in Yakima, Washington, Cascade’s cash rebates proved quite significant.  According to owner Rachel Roberts, “Building a new restaurant gets expensive, so we were thankful that the rebates helped offset some of the cost.” The new location is realizing savings with their purchase of an energy-efficient gas fryer and convection oven. This equipment can cut energy bills without sacrificing quality or cooking performance.

A Menu of Savings

Collectively these organizations earned rebates totaling $6,300. The savings don’t end there – all combined these establishments will save an estimated 5,707 therms annually; equating to $5,991 in estimated annual cost savings.

Conservation is not just a part of the picture for these businesses—it is a way of doing business. La Vie en Rose Bakery has cut down their waste to five percent, implemented a recycling and compost program, uses biodegradable to-go utensils and donates leftover food each day to people in need. According to Lahr, they wouldn’t have it any other way, “Sustainability is the mantra and creed we live and operate by.”

This website uses cookies to improve your experience while you navigate through the website. Out of these cookies, the cookies that are categorized as necessary are stored on your browser as they are essential for the working of basic functionalities of the website. We also use third-party cookies that help us analyze and understand how you use this website. These cookies will be stored in your browser only with your consent. You also have the option to opt-out of these cookies. But opting out of some of these cookies may have an effect on your browsing experience.
Necessary Always Enabled
Necessary cookies are absolutely essential for the website to function properly. This category only includes cookies that ensures basic functionalities and security features of the website. These cookies do not store any personal information.
Non-necessary
Any cookies that may not be particularly necessary for the website to function and is used specifically to collect user personal data via analytics, ads, other embedded contents are termed as non-necessary cookies. It is mandatory to procure user consent prior to running these cookies on your website.
SAVE & ACCEPT